Home Latest 15+ Biopic Movies You Must Not Miss 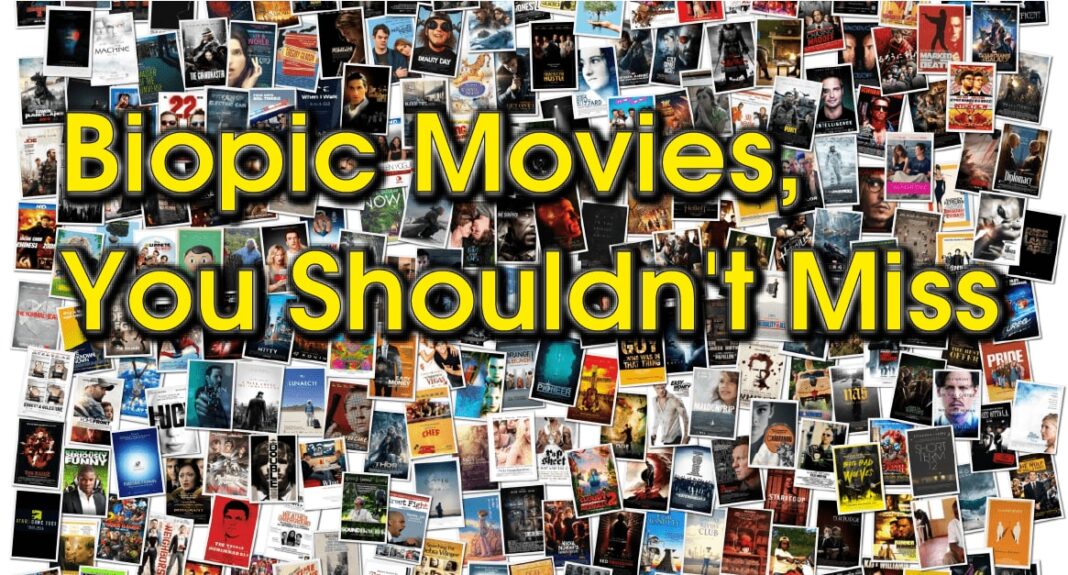 Regarding Centuries, Mankind has been grown and faced so many ups and downs. We know them as reading history or just as an image. There are so many things to learn and pursue in our real life. Some of them are legends and some become our inspirations. Taking those inspiring stories some great directors have made some iconic biopic movies for us. Watching biopics makes a person believe in his hard work, knowledge, patient and God. Taking life logics and method can help you succeed in life. Here are some of the top best biopic movies listed with a short description which you must not miss watching. Hope you enjoy these movies much and also learn more.

A mathematical genius, John Forbes Nash Jr. made an astonishing discovery early in his career and stood on the brink of international acclaim. But the handsome and arrogant Nash soon found himself on a painful and harrowing journey of self-discovery once he was diagnosed with schizophrenia. After many years of struggle, he eventually triumphed over this tragedy, and finally, late in life, received the Nobel Prize.

In THE IMITATION GAME, Benedict Cumberbatch stars as Alan Turing, the genius British mathematician, logician, cryptologist and computer scientist who led the charge to crack the German Enigma Code that helped the Allies win WWII. Turing went on to assist with the development of computers at the University of Manchester after the war, but was prosecuted by the UK government in 1952 for homosexual acts which the country deemed illegal.

Frank Abagnale, Jr. (Leonardo DiCaprio) worked as a doctor, a lawyer, and as a co-pilot for a major airline — all before his 18th birthday. A master of deception, he was also a brilliant forger, whose skill gave him his first real claim to fame: At the age of 17, Frank Abagnale, Jr. became the most successful bank robber in the history of the U.S. FBI Agent Carl Hanratty (Tom Hanks) makes it his prime mission to capture Frank and bring him to justice, but Frank is always one step ahead of him.

Paan Singh Tomar, an athlete, wins gold medals at the Indian National Games seven times in a row. He is forced to become a dacoit when his mother is murdered and the police do not take any action.

Dangal is an extraordinary true story based on the life of Mahavir Singh and his two daughters, Geeta and Babita Phogat. The film traces the inspirational journey of a father who trains his daughters to become world class wrestlers. A once-promising wrestler pursues the gold medal he never won by training two of his daughters to compete at the Commonwealth Games.

U.S. Navy SEAL Chris Kyle is sent to Iraq with only one mission to protect his brothers-in-arms. His pinpoint accuracy saves countless lives on the battlefield and, as stories of his courageous exploits spread, he earns the nickname “Legend”. Despite the danger, as well as the toll on his family at home, Chris serves through four harrowing tours of duty in Iraq, personifying the spirit of the SEAL creed to “leave no one behind.” But upon returning to his wife, Taya Renae Kyle (Sienna Miller), and kids, Chris finds that it is the war he can’t leave behind.

Academy Award-winners Matt Damon and Christian Bale star in FORD v FERRARI, based on the remarkable true story of the visionary American car designer Carroll Shelby (Damon) and the fearless British-born driver Ken Miles (Bale), who together battled corporate interference, the laws of physics, and their own personal demons to build a revolutionary race car for Ford Motor Company and take on the dominating race cars of Enzo Ferrari at the 24 Hours of Le Mans in France in 1966.

During WWII, acclaimed Polish musician Wladyslaw faces various struggles as he loses contact with his family. As the situation worsens, he hides in the ruins of Warsaw in order to survive. Famed Polish pianist Wladyslaw Szpilman struggles to survive the onslaught of Nazi tyranny during World War II in this drama based on his memoirs.

Bohemian Rhapsody is a foot-stomping celebration of Queen, their music and their extraordinary lead singer Freddie Mercury. Freddie defied stereotypes and shattered convention to become one of the most beloved entertainers on the planet. Having suffered greatly without the collaboration of Queen, Freddie manages to reunite with his bandmates just in time for Live Aid. Queen cements a legacy that continues to inspire outsiders, dreamers and music lovers to this day.

Hugh Jackman and Zac Efron star in this bold and original musical that celebrates the birth of show business and the sense of wonder we feel when dreams come to life. Inspired by the ambition and imagination of P.T. Barnum, who becomes a worldwide sensation in the show business. His imagination and innovative ideas take him to the top of his game.

“Hamilton” is the story of America then, told by America now. Featuring a score that blends hip-hop, jazz, R&B and Broadway, “Hamilton” has taken the story of American founding father Alexander Hamilton and created a revolutionary moment in theatre musical that profoundly impacted culture, politics, and education. Filmed at The Richard Rodgers Theatre on Broadway in June of 2016, the film transports its audience into the world of the Broadway show in a uniquely intimate way.

Little was expected from Stephen Hawking, a bright but shiftless student of cosmology, given just two years to live following the diagnosis of a fatal illness at 21 years of age. However, he became galvanised by the love of fellow Cambridge student, Jane Wilde, and he went on to be called the successor to Einstein and a husband and father to their three children. Over the course of their marriage as Stephen’s body collapsed and his academic renown soared, fault lines were exposed that tested the lineaments of their relationship and dramatically altered the course of both of their lives.

First Man, the riveting story of NASA’s mission to land a man on the moon, focusing on Neil Armstrong and the years 1961-1969. A visceral, first-person account, based on the book by James R. Hansen, the movie will explore the sacrifices and the cost—on Armstrong and on the nation—of one of the most dangerous missions in history.

Steve Jobs, a renowned businessman, faces problems in his personal and professional life while trying to launch three products in the market. Set backstage at three iconic product launches and ending in 1998 with the unveiling of the iMac, Steve Jobs takes us behind the scenes of the digital revolution to paint an intimate portrait of the brilliant man at its epicentre.

Inspired by the incredible events surrounding an attempt to reach the summit of the world’s highest mountain, Everest documents the awe-inspiring journey of two different expeditions challenged beyond their limits by one of the fiercest snowstorms ever encountered by mankind. Their mettle tested by the harshest elements found on the planet, the climbers will face nearly impossible obstacles as a lifelong obsession becomes a breathtaking struggle for survival.

Rocketman​ is an epic musical fantasy about the incredible human story of Elton John’s breakthrough years. The film follows the fantastical journey of transformation from shy piano prodigy Reginald Dwight into international superstar Elton John. This inspirational story – set to Elton John’s most beloved songs and performed by star Taron Egerton – tells the universally relatable story of how a small-town boy became one of the most iconic figures in pop culture.

Milkha Singh, an Indian athlete, overcomes many agonising obstacles in order to become a world champion, Olympian and one of India’s most iconic athletes.

Louis Zamperini, a US Olympic track record holder, pulls himself through a plane crash in the Second World War only to be left at the mercy of nature and eventually caged up as a prisoner of war.